Flohs and Puces – flea markets of Germany and France

The flea markets on the French and German sides of the Rhine in Alsace and Baden-Württemberg have evolved separately and have developed their own distinct characteristics and culinary delights.

On the French side of the southern Rhine the Alsace flood plain is one huge maize plantation, dotted with largely charmless farming villages, deserted potash mines and abandoned factories that are reminiscent of the bleak grey sets that were often used as locations in the sixties Avengers’ series.

Vogelsheim, a particularly unattractive corner of France with its broken windowed deserted army barracks has a regular flea market on the Intermarché car park that on a cold damp Sunday morning at 6 am is simply the last word in grim and grot.

But a mere dozen miles across the sweet corn desert things look up. The transition from flood plain into the foothills of the Vosges is marked by a change of soil and instead of maize and a scattering of walnut trees there are vines and chestnuts and a string of unspoilt and clearly wealthy wine villages. On warm summer mornings the flea markets in the old streets of these towns are a delight.

The French flea markets have a number of sub-species with marché au puces, vide grenier and brocantes being the most common. Brocantes are at the antique end of the range, brown furniture, pieces of cut glass chandeliers, old picture frames, mirrors and countless glass-topped cabinets with their sad mix of broken watches,  ivory objects of uncertain provenance, medals and assorted brass and silver crap.

There are no art dealers to be found as Alsace does not appear to have the British tradition of amateur artists and semi-professional dabblers. The only pictures I have seen for sale are faded prints of Van Gogh or Cezanne masterpieces or quite disgusting mass-produced oily horrors. 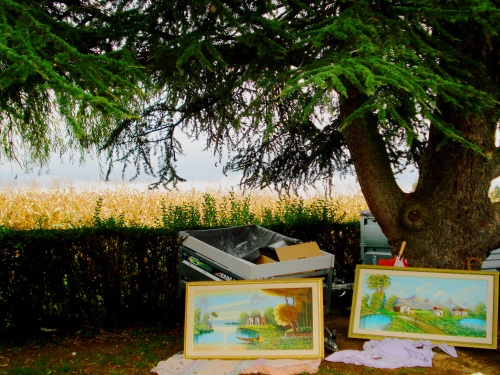 The horrors of an Alsace Flea market’s art department

French fleas are often organised by local clubs or societies or by the Sapeurs-pompiers and can be relied on to be well organised with volunteers pushing or cycling their croissant and coffee stalls through the streets. Later in the morning the giant barbecues are lit, the smoke from the vine roots and the spicy merguez sausages is my Sunday morning incense. Though most markets advertise a start time of 7 am they will always be busy with dealers at 5.30 or 6 am.

The German flea market (Flohmarkt) lives outside in the summer but migrates to the warmer climes of school halls in the winter. The summer fleas are much more relaxed than the French ones. They typically only start at 11 am, some only start at 3pm and run into the late evening, and they always appear to be less frantic, with haggling over prices rare and fewer dealers buying stock than in France.

All hands to the rigging – a breezy October market

The German catering can be a bit hit and miss and although sometimes a sausage with or without curry powder can be sourced, and sauced, it is the unfortunate dull dry doughy knot, the Pretzel, that is most common. The Pretzel dough is coated in a gloss varnish to which salt crystals as big as small gemstones are glued. If these catering disasters came in a cardboard box you would unquestionably choose in preference to eat the box.

The flea markets of Southern Germany have evolved a feature never seen in France, the museum stall.

This stall is invariably run by a retired Frau or a Frau with her subservient Mann. He can always be identified by his deference to herself and he will always check, “Was kostet?”, with the management.

These are meticulously laid out stands, crisp white table clothes, crocheted or lace doilies under each piece and lovingly handcrafted individual item price labels. The entire stall can be over decorated to the point of being as overwhelming and claustrophobic as a pink furnished English bungalow B & B bedroom. These stalls set their prices particularly high to make sure that no-one will buy anything and disturb the display. The stall is particularly common near to the Swiss border where it can be the most numerous type of stall on any market.

The German markets are starting to get one or two bold stall holders displaying 60s and 70s ceramics and retro or vintage wares but many young Germans who grew up with Fat Lava lamps and West German ceramics in their parents’ homes have no wish to have these in their Ikea apartments in the same way that young families in England have no love for their parents’ brown furniture.

Spiderman at a Mulhouse flea market

In the flea markets of Alsace the higher end items, gold, jewellery and watches all gravitate to big city dealers in Basle, Strasbourg or Paris. The Germans and Swiss love the French kitchenalia, wire baskets, enamel jugs and candlesticks and dealers cross the border every weekend to raid the Alsace markets. These items are as a result even more expensive than in Provencal markets.

And so while the Germans buy all the French kitsch and kitchenalia they are in turn perfectly happy to ship their mass-produced 60’s, 70’s fat lava vases across the channel to Retroland.